Johannes Vermeer is one of the most celebrated artists of the Dutch Golden Age. Yet much of his work remains unknown: only 35 of his paintings are exhibited around the world. Seven of these masterpieces can be seen in the Netherlands. Three hang in Museum Mauritshuis in The Hague and four in the Rijksmuseum: The Milkmaid (c. 1660) – perhaps his best-known work, and The Little Street (c. 1658), The Love Letter (c. 1669-70) and Woman Reading a Letter (c. 1663). This month, we are taking an in-depth look at this last painting. Here are ten fascinating facts you might not know about Vermeer’s Woman Reading a Letter.

1. Vermeer was not always popular

It was not until the nineteenth century that Vermeer’s work really began to gain in popularity. This was partly due to his focus on the world of the bourgeoisie, a world people could readily identify with: the scenes he painted felt familiar and recognizable and yet were steeped in the atmosphere of the Netherlands’ Golden Age. People were also fascinated by his combination of an almost photographic accuracy with a profoundly poetic mood: Vermeer was not a man of dazzling salon paintings, but of contemplative scenes and tranquil moments. 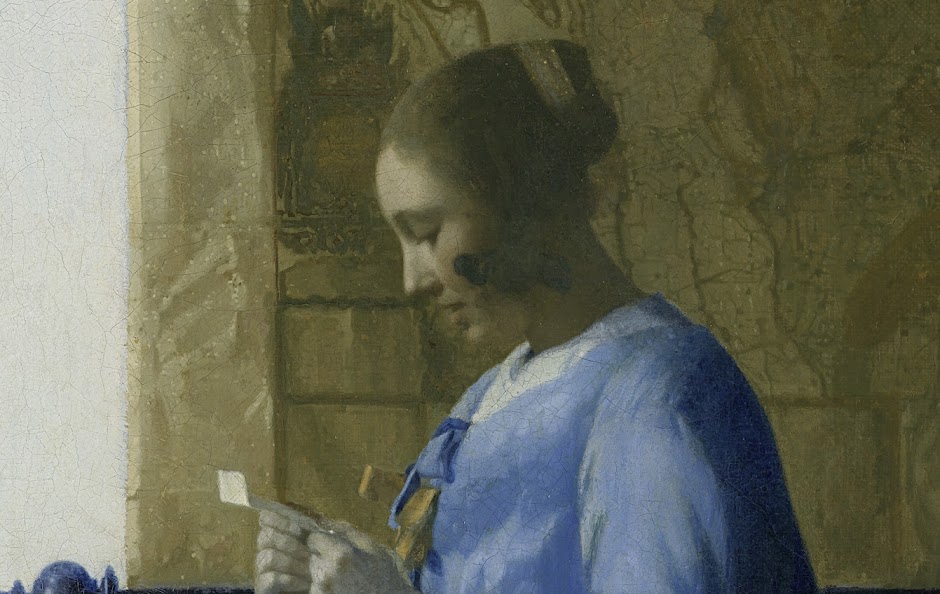 Looking at the painting, we cannot help but be intrigued by the letter itself. What does it say? Vermeer provides us with a number of visual clues. The woman is wearing a jacket worn only by wealthy women at home, so the artist is clearly giving us an intimate glimpse of a woman in a domestic setting. The letter in her hands must be personal, as business letters were usually read in the study. Could it be a love letter? A letter from a friend, or a family member? We will never know… 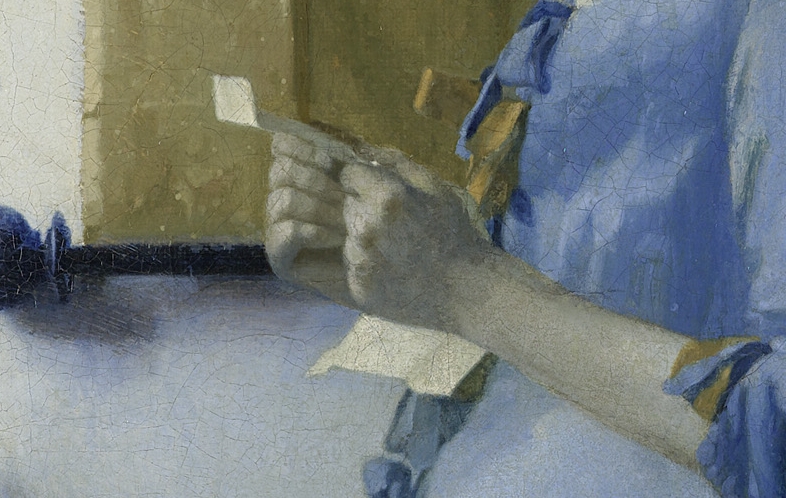 A striking feature of this painting, and of much of Vermeer’s work, is his use of the colour blue. Vermeer used the semiprecious stone lapis lazuli to achieve this colour. This mineral comes from Afghanistan and was ground into pigment. Although Vermeer was far from wealthy, he often used this expensive raw material in his paintings. Woman Reading a Letter is the ultimate example of Vermeer’s use of blue. In 2010-2011, conservator Ige Verslype discovered how Vermeer managed to make his blue look so remarkably clear: he applied the blue paint on top of a layer of green. 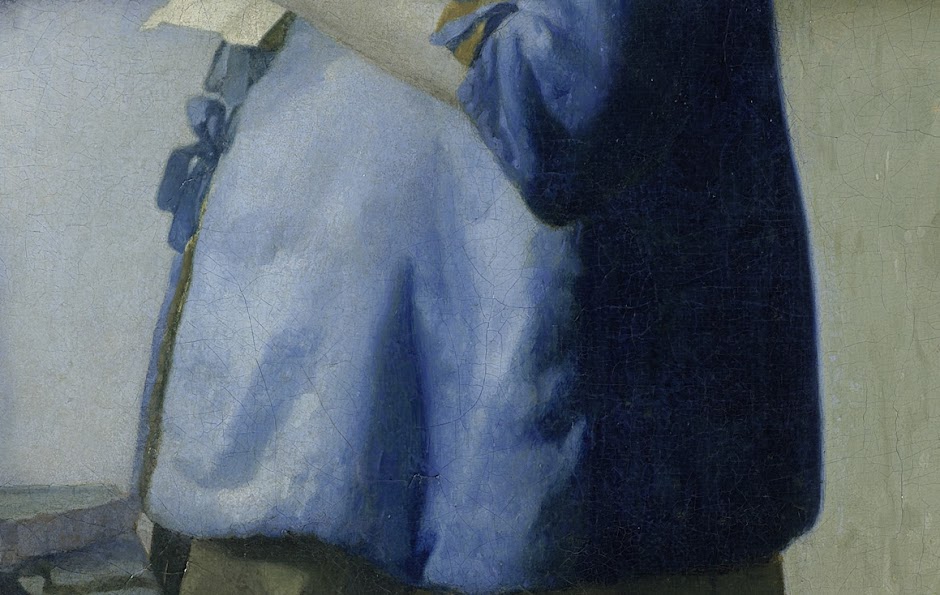 Daylight plays an important role in Vermeer’s paintings. It almost always comes from a window to the left of the frame, and in this painting too he suggests light entering the space from the left. A soft blue shadow on the wall comes from an invisible window that, as in other paintings by Vermeer, consists of two horizontal sections. According to the law of optics there must also be a second window: the wider shadows are cast by the light coming in through a corner window, the smaller ones by a window further away. 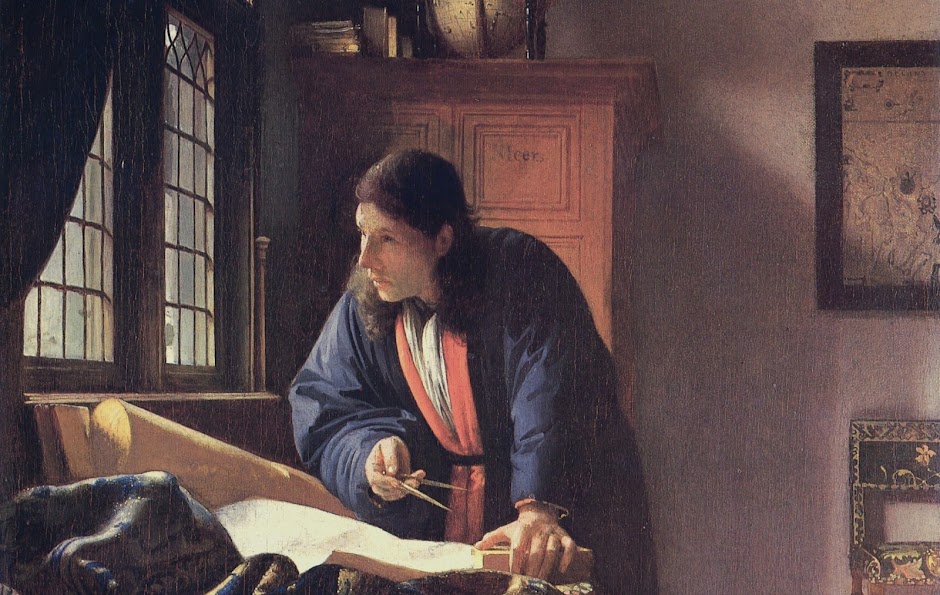 5. Did Vermeer only have one map as a background for his paintings?

The map in the background is not there to attract attention; our focus is firmly on the woman and the letter. Even so, we can’t help but be curious about what is on the map. It was made by Balthasar van Berckenrode and was published by the famous mapmaker Willem Janszoon Blaeu (1620). It shows the Dutch provinces of Holland and West Friesland. This is not the first time that the map has featured in a Vermeer painting. It can also be found in Officer and Laughing Girl and The Love Letter. 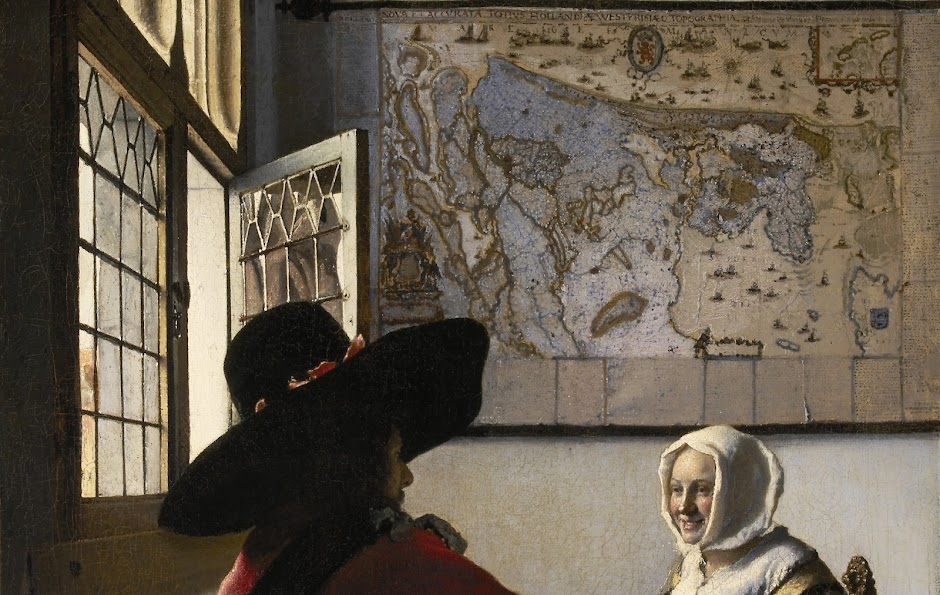 Compared to a larger than life character such as Rembrandt, Vermeer cuts a far more modest figure. Rembrandt often signed his paintings with his first name, something only great Italian painters such as Raphael had done before him. Vermeer, on the other hand, signed his paintings ‘IVMeer’ or ‘IVM’. Woman Reading a Letter bears no signature at all. 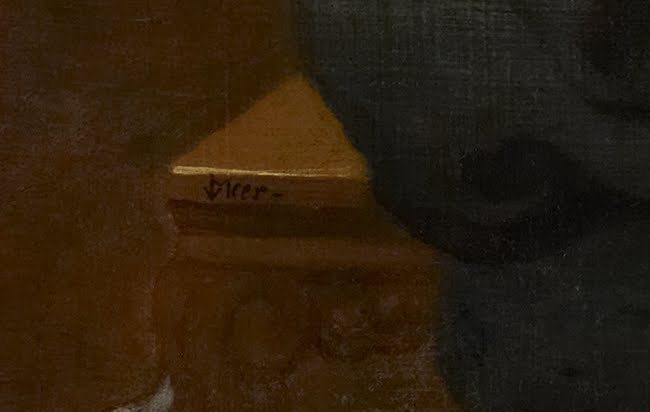 Woman Reading a Letter is part of a bequest by Adriaan van der Hoop (1778-1854). Van der Hoop was an immensely wealthy Amsterdam merchant who amassed a major art collection during his life. He mainly acquired paintings from the Golden Age. In old age, Van der Hoop decided to leave his collection to the City of Amsterdam. His will stipulated that ‘the aforementioned collection of paintings, brought together by him with great care, effort and expense during his lifetime, should, after his death, remain together as a whole for this city or at least for his Fatherland.’ 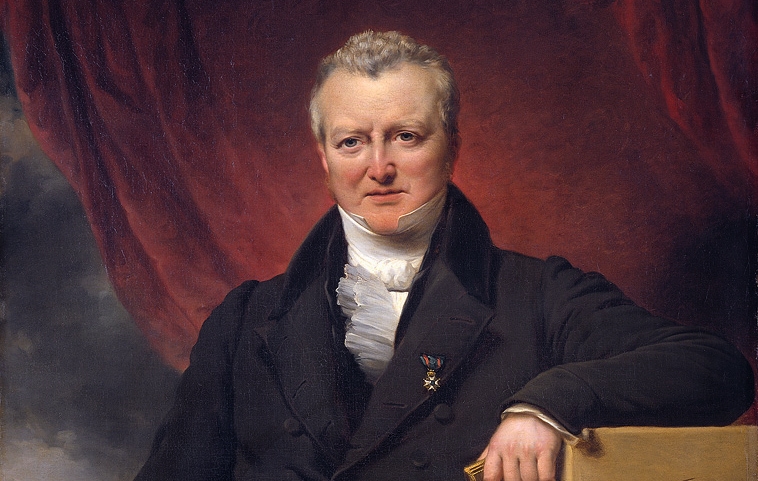 Han van Meegeren (1889-1947) is perhaps the most famous forger in art history. He sold his own pièce de résistance The Supper at Emmaus as a genuine Vermeer for a huge sum of money. The work was even exhibited as a Vermeer at Rotterdam’s Boijmans van Beuningen museum. Van Meegeren also became notorious and celebrated in equal measure when it turned out that he had tricked leading Nazi Hermann Göring into exchanging a forged Vermeer for 200 stolen Dutch Masters. The forger had to appear in court to prove that he really was the artist behind the painting sold as a Vermeer by giving a live demonstration of his skills. Before painting The Supper at Emmaus, he produced two other works in Vermeer’s trademark style. One of these is Woman Reading Music, which was intended solely as an exercise and was never offered for sale. 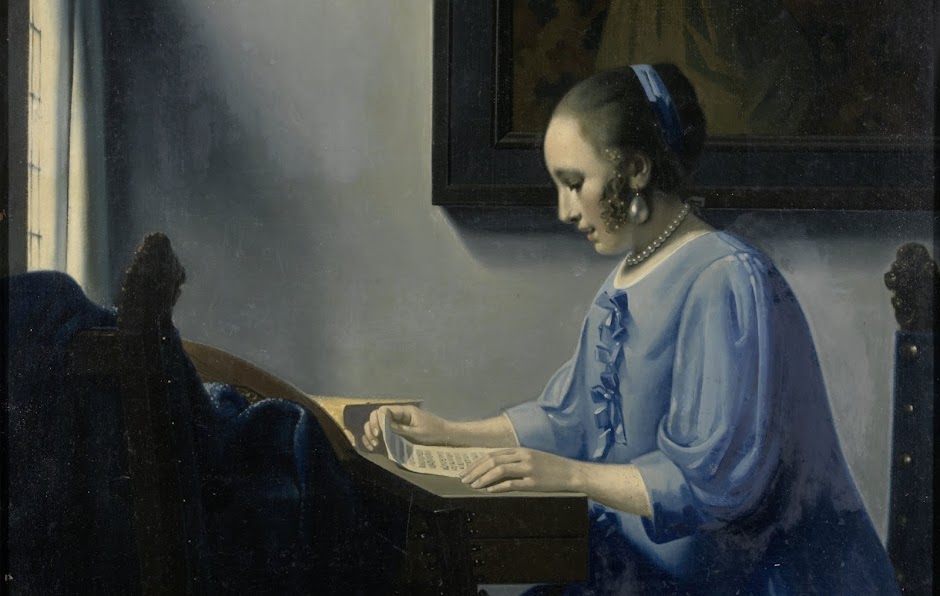 Woman Reading a Letter has been as a source of inspiration for many poets, writers and artists. Danish artist Vilhem Hammershoi (1864-1916) is one such artist, who was clearly influenced by Vermeer’s use of motifs, colour and composition. He visited the Netherlands in 1887 and must have seen Woman Reading a Letter, because his own work Ida Reading a Letter from 1899 is practically a mirrored version of the Vermeer painting. 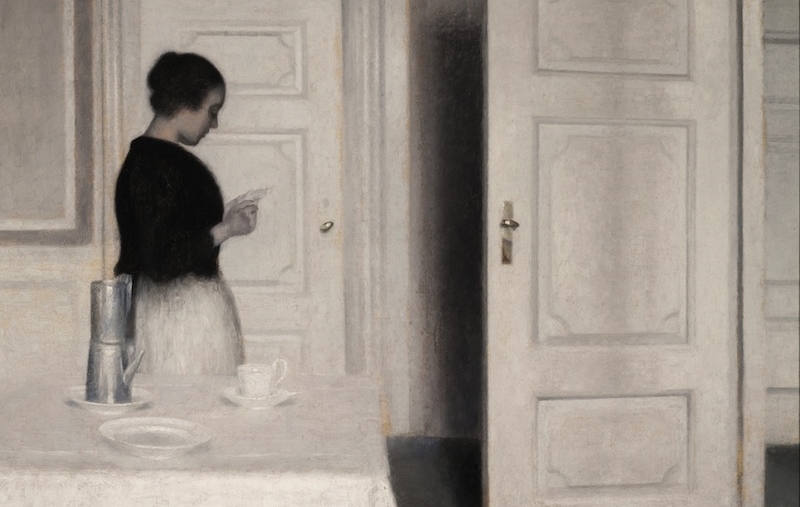 In 2010-11, Ige Verslype restored the painting in the Rijksmuseum’s own studio. During this painstaking process, she discovered that Vermeer had made changes as he worked on the painting. For example, the woman’s jacket had been wider to start with and there may even have been a fur collar underneath. But the greatest revelation of the 2010-2011 restoration was the re-emergence of the painting’s original palette of colours, which had been clouded by old, yellowed layers of varnish. Today, Vermeer’s refinement and mastery of colour, not least the extraordinary contrast between radiant blue and muted ochre tones, can once again be admired in all its glory at the Rijksmuseum. 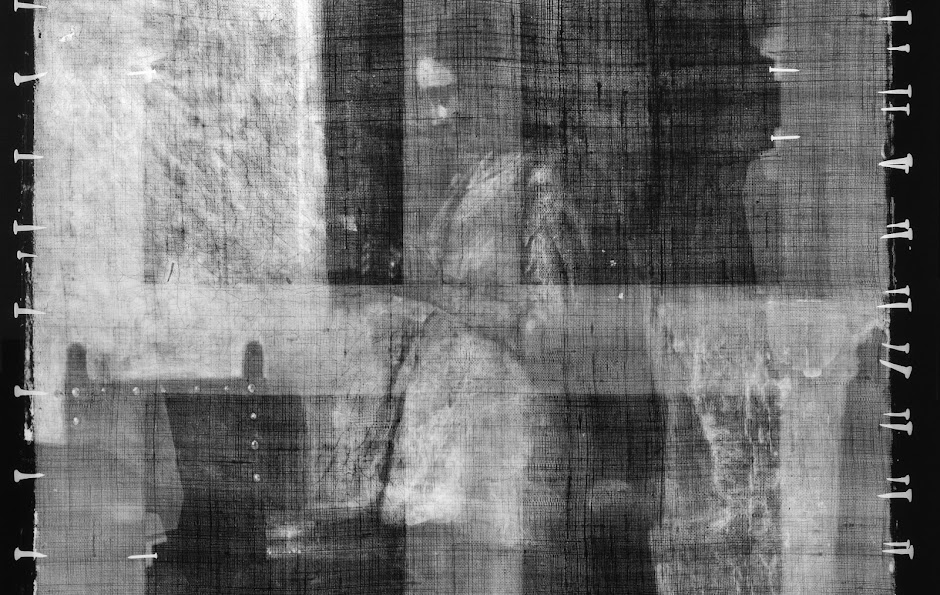