For the last 270 years at least the Hermitage in St Petersburg has had cats in service to guard the museum. Cats have never lived in the Rijksmuseum, but dogs worked here until the mid-20th century – a dog named Rex, for example, was the loyal companion of one of the guards. Fortunately, cats feature in lots of the artworks in the museum, in everything from paintings to fireplace supports (or ‘firebucks’), and from nightlights to 18th-century cartoons. Here are the most exceptional cats in the Rijksmuseum collection.

1. This is the most popular cat in the Rijksmuseum collection

Why’s that? Well, have you ever seen a cat and a monkey hugging each other? I haven’t, and neither have the visitors to the museum – that’s why they share pictures of this cat on social media multiple times each day. Adam and Eve are just about to eat the forbidden fruit, and the cat is scared of the wrath of God. 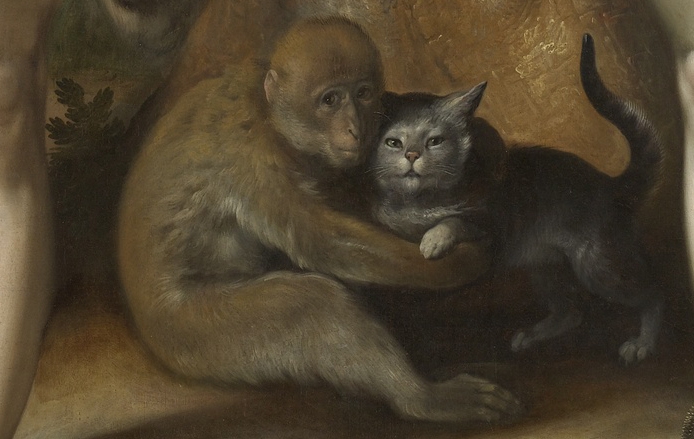 Henriette Ronner’s specialism was paintings of cats, and you’ll find her work in museums all over the Netherlands. She painted playful cats, cat families, sleepy cats, and lots more besides. Here you can see her famous painting of a colourful family of cats. 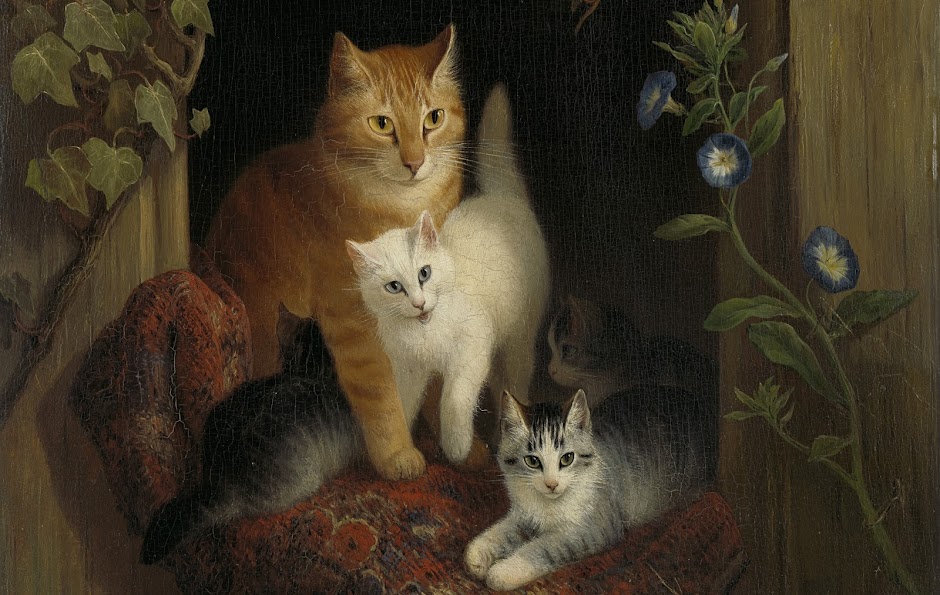 3. This nightlight wouldn’t look out of place in a modern room – or would it?

This object was acquired in the 18th century by the Dutchman Jean Theodore Royer (1737-1807), who was an expert on China. It was made for children who are scared of the dark. 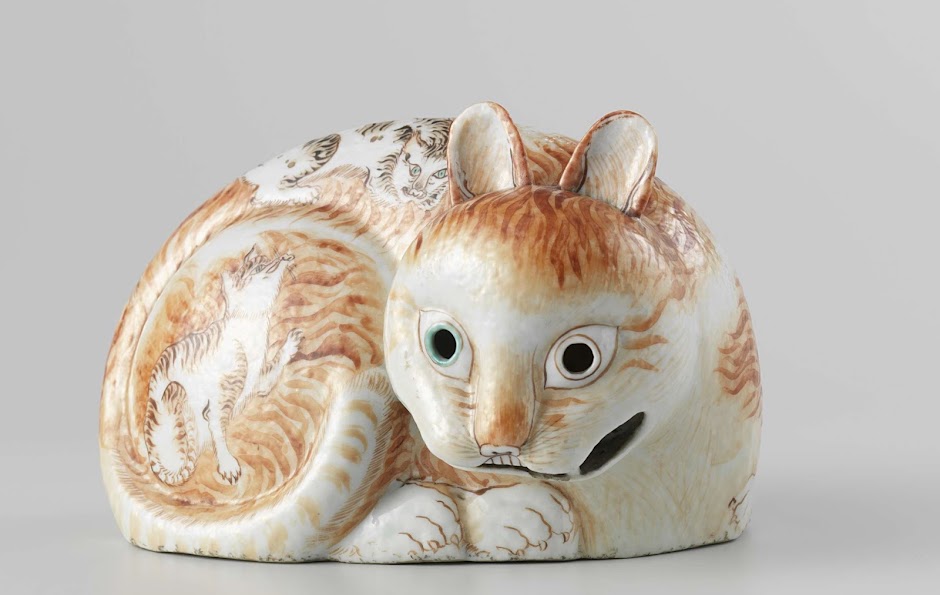 4. If you want to make a good painting of a cat, you need to draw sketch studies first

That’s exactly what Thomas Gainsborough (1727-1788) did. He was one of the most famous English portrait painters of the 18th century. You can see the cat is snugly curled up, half asleep, washing itself. 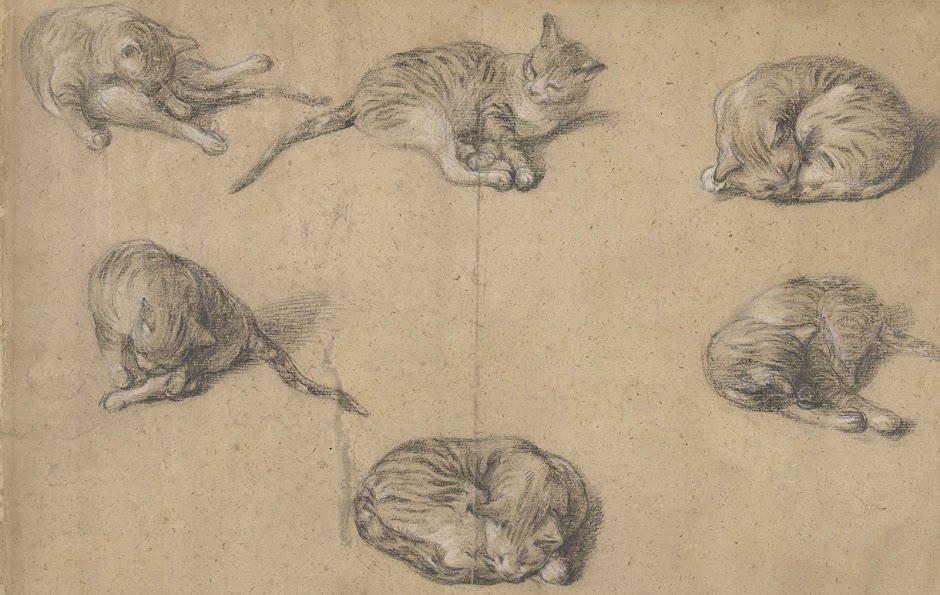 The children are making the cat dance to music, but how much fun is it for the cat? 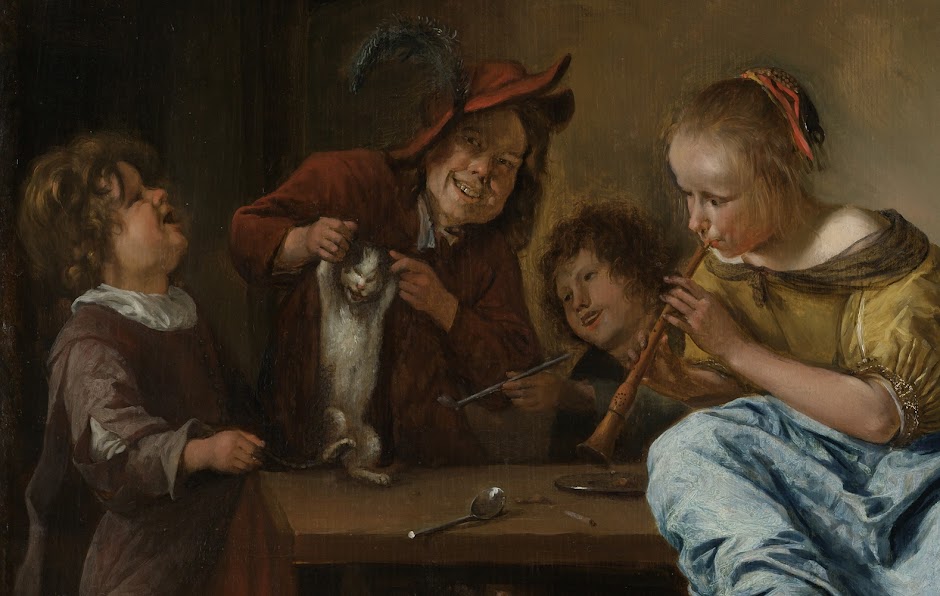 That much is clear from the many sketch studies he drew of her. This drawing shows Lola playing with a cat bell. 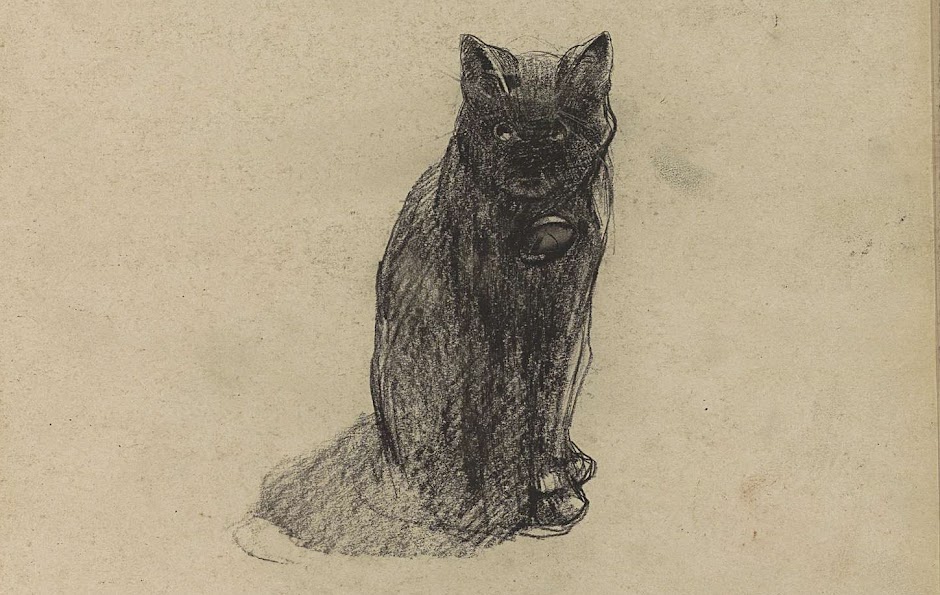 Firebucks were used in fireplaces to support the iron grate on which the firewood were placed. When in use, it looks like the cat is warming itself by the fire. 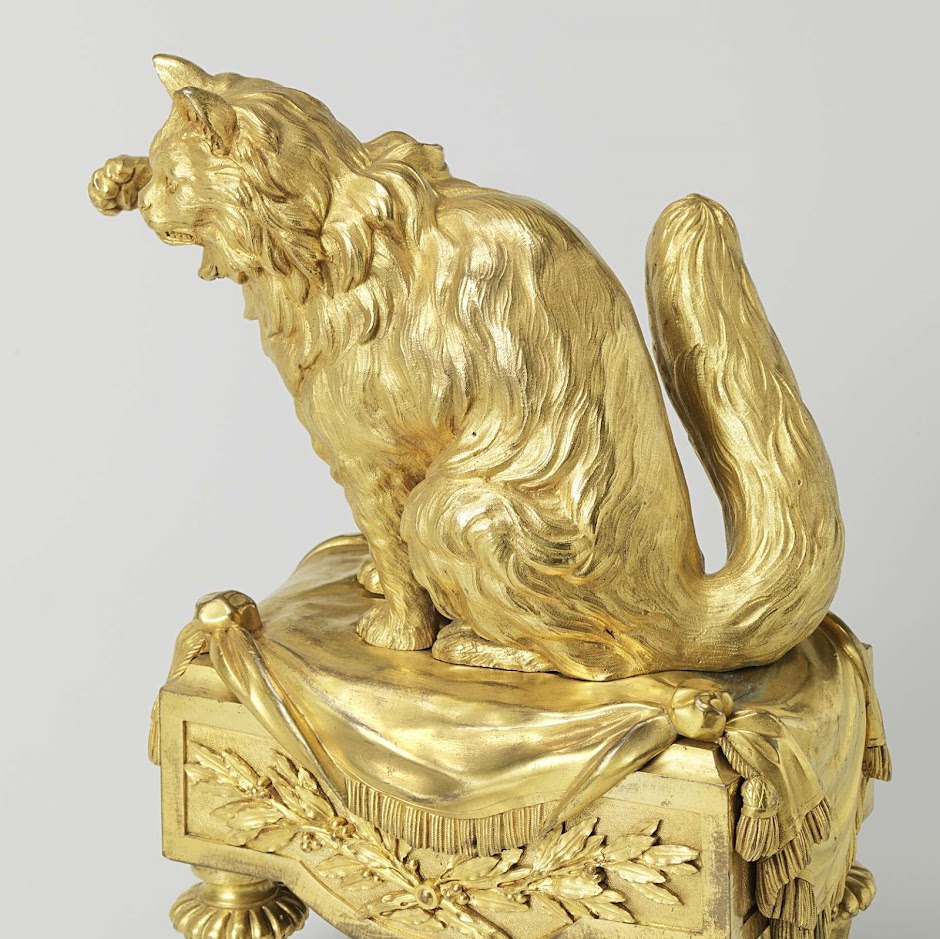 Portraying people as animals was a popular way of conveying a humorous or satirical message in the 17th century, just as it is today. Adriaen van de Venne, who made the painting from which this print is taken, explained that the ‘foolish animals’ in his work represent the seven deadly sins. Can you guess which sin is being depicted here? 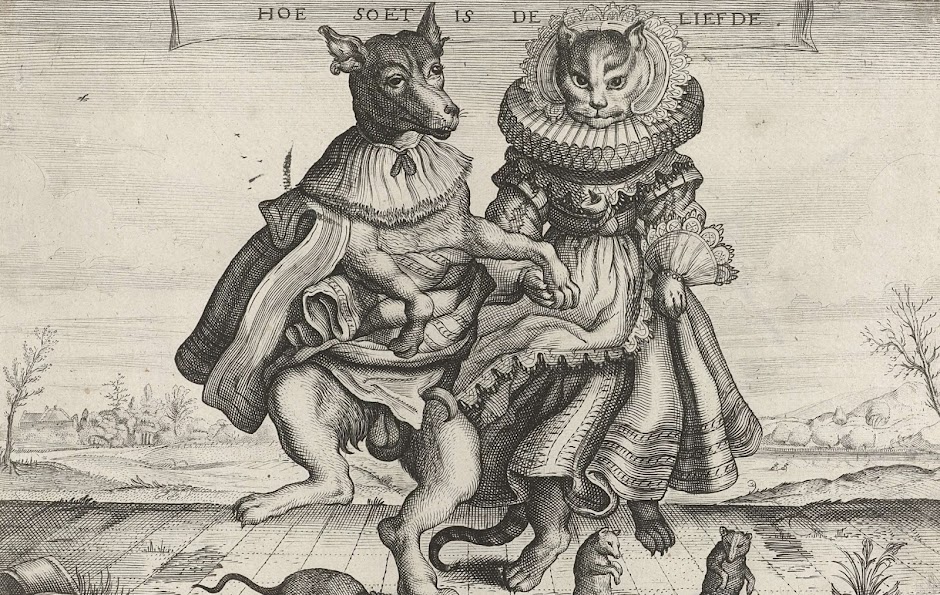 9. This doesn’t look very animal-friendly, but the cat doesn’t seem to mind too much

This is Tabby. She was dressed as an old lady knitting for this 19th-century photograph. Is it acceptable to do this to a cat? What do you think? 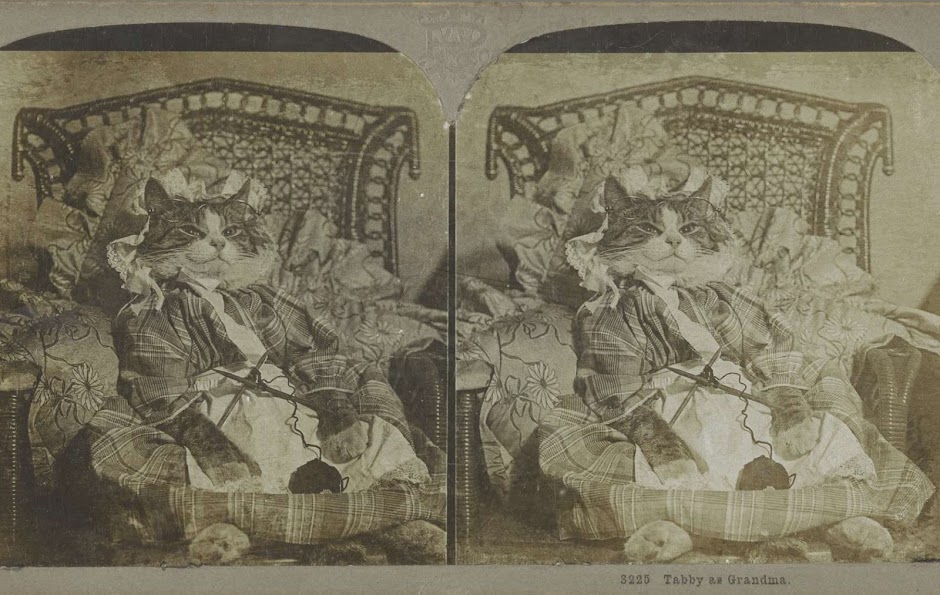 Around 1600, Emperor Rudolph II (1552-1612) commissioned De Boodt to make 12 albums of illustrations of flora and fauna – some of them fantastical. If you’ve got the time, be sure to check out the albums. You’ll find a dodo and a dragon. 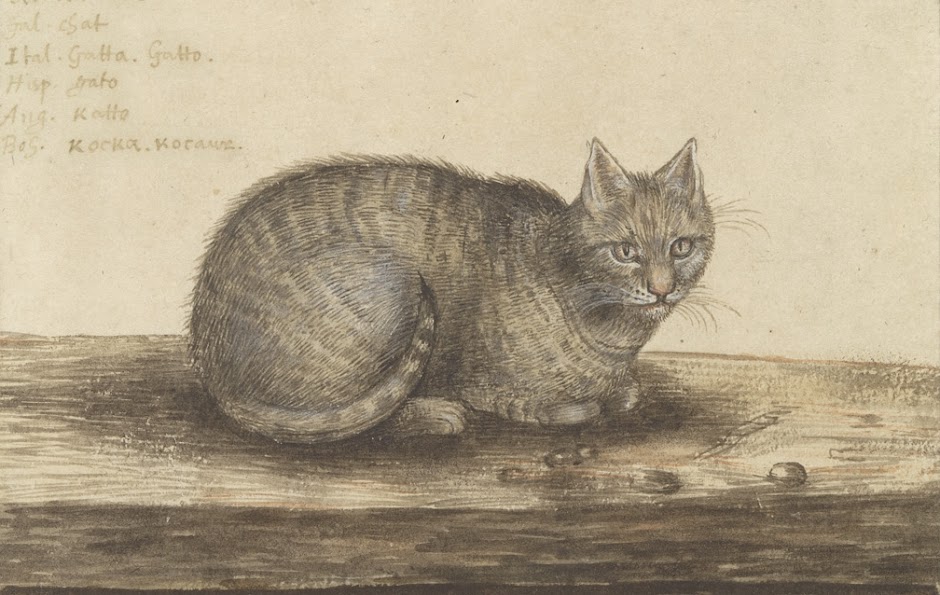