In this top 10 we will take a closer look at some important and influential women in Dutch history.

Kenau Hasselaer was said to have defended her city heroically and with total disregard for her safety during the Spanish siege of Haarlem in 1573. She was the subject of later portraits and written accounts. All of it, however, was invented, a thrilling legend typical of the times. In Dutch usage, a ‘kenau’ is a woman who is not afraid of anybody or anything. 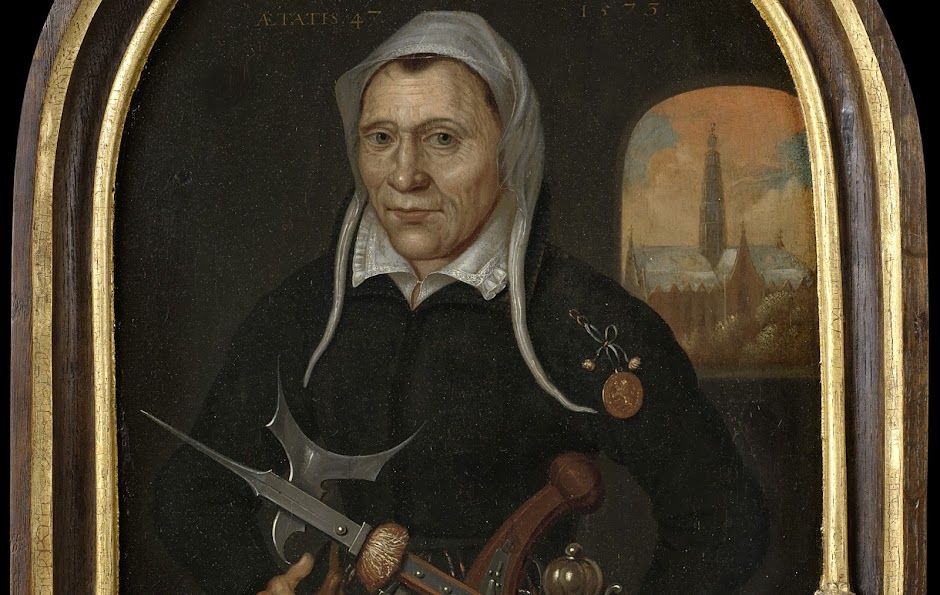 Judith Leyster (1609-1660) was one of the very few professional female painters of her time. She was also the first woman to be recognized as master painter. The singing lute-player is depicted di sotto in su, from a low vantage point. His extravagant red breeches with yellowish-gold and black stripes are slightly out of focus, creating the illusion that the viewer is looking up at him from close by. 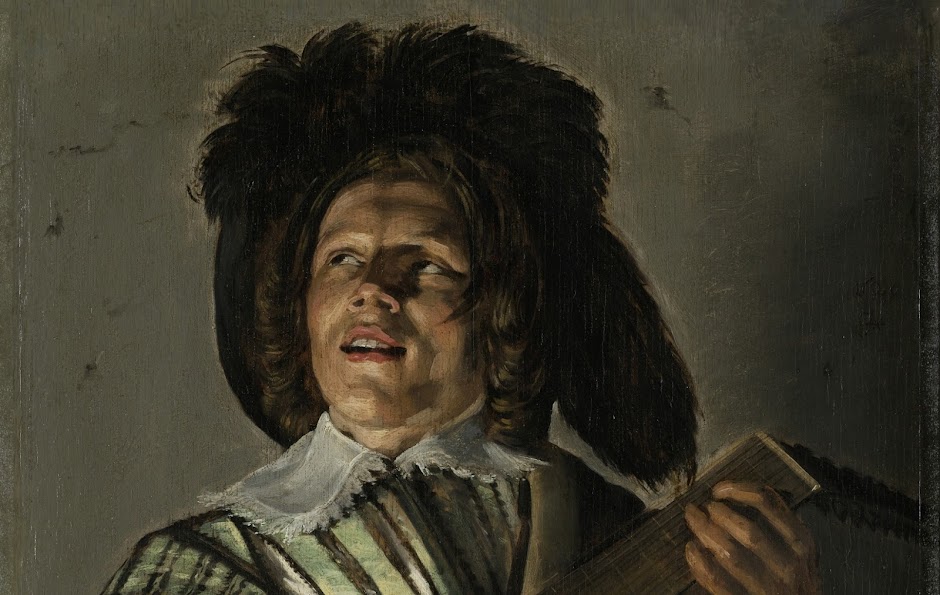 Like other members of her illustrious artist family, Gesina ter Borch was a gifted artist. Three albums assembled by her have been preserved, including a scrapbook containing portraits by her of well-to-do people in everyday settings. Young women holding fans feature in many of these watercolours, including this self-portrait. The VOC imported Chinese fans from the beginning of the 17th century. Even though they were also subsequently made in the northern Netherlands, fans continued to be seen as an exotic accessory. 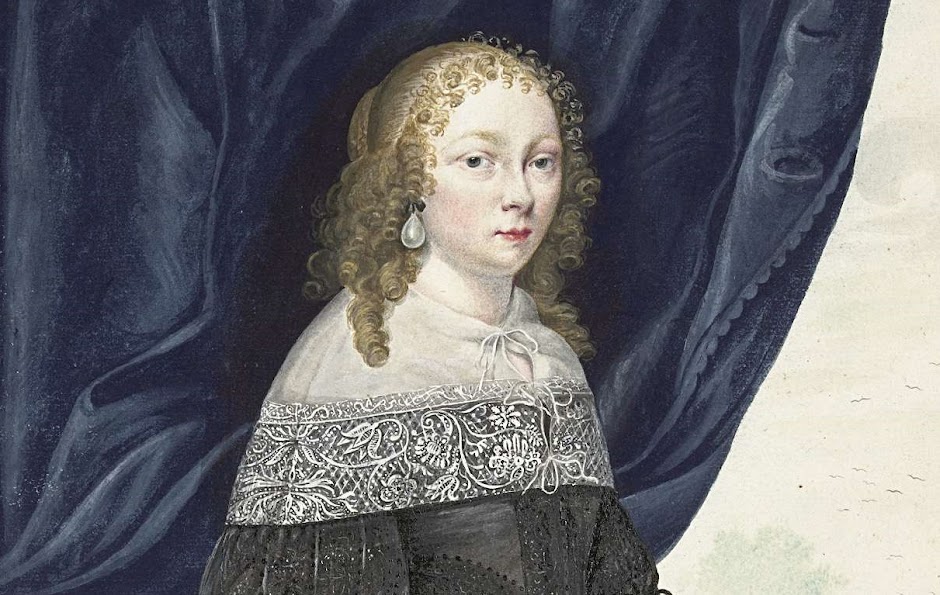 Rachel Ruysch (1664-1750) was the daughter of Frederik Ruysch, a professor of botany. Her artistic talent was recognized early on and she became a renowned painter of floral still lifes. Even though she bore ten children, she nevertheless managed to pursue a professional career as an artist. Her pictures were admired at the courts in The Hague and Germany, and she was appointed court painter to the Elector Palatine. 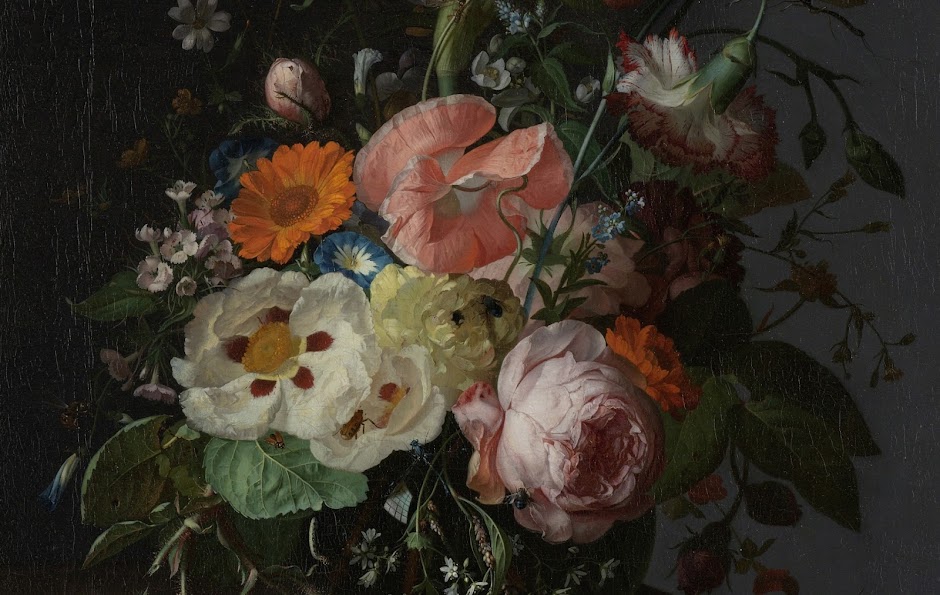 Still Life with Flowers on a Marble Tabletop, Rachel Ruysch, 1716

The Lepers’ Asylum originally took in patients suffering from leprosy. Since that infectious disease rarely still occurred during the 17th century, people with other afflictions were also cared for there. Three regentesses took charge of the day-to-day running of the institution, from overseeing servants to purchasing goods. Bol painted them seated at a table set before a plain back wall. Their identities are known from the family arms on the chimneypiece, above which the painting hung. 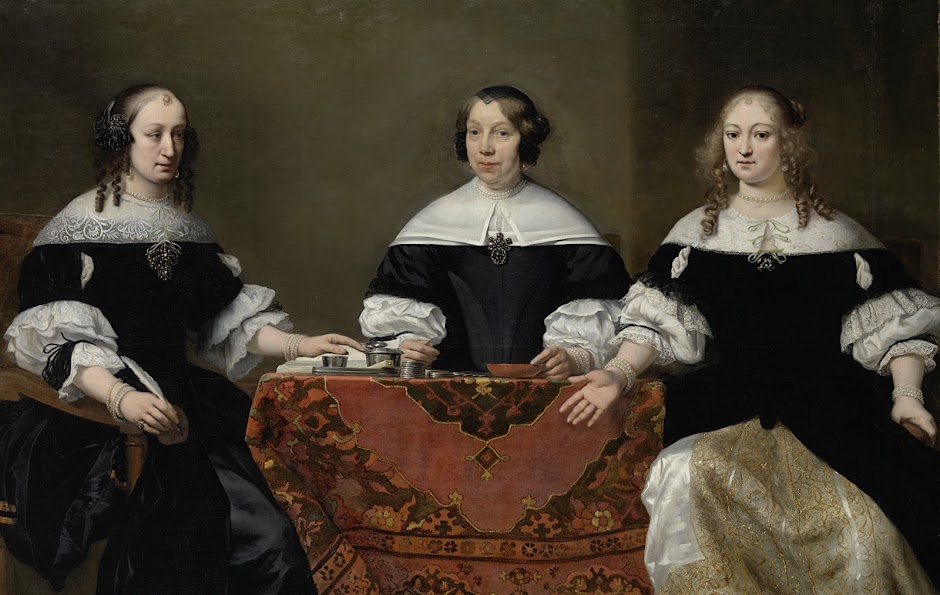 Portrait of the Three Regentesses of the Leprozenhuis, Amsterdam, Ferdinand Bol, c. 1668

At a women’s skating race in Leeuwarden in 1809, the crowd watched sixty-four unmarried women vie for a gold cap-brooch. The winner was Houkje Gerrits Bouma. For greater ease, many had thrown off their cloaks. Baur painted the finalists with bare arms, a jettisoned cloak on the ice. It left little to men’s imagination and caused an outcry; therefore it was the last women’s race for many years. 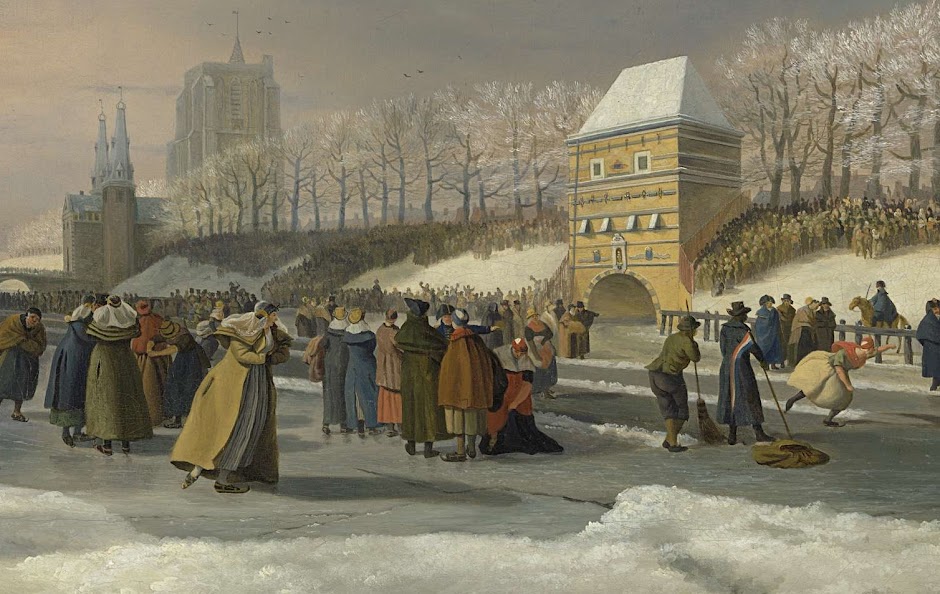 Lizzy Ansingh and Thérèse Schwartze belonged to the Amsterdamse Joffers, a group of women painters active around 1900. Schwartze was the undisputed star and enjoyed great success with her fashionable society portraits. This informal likeness of her niece Lizzy Ansingh is one of her best. The contrast between light and dark convey intimacy, and the swift, vigorous brushstrokes and red accent on the bright green dress radiate power. 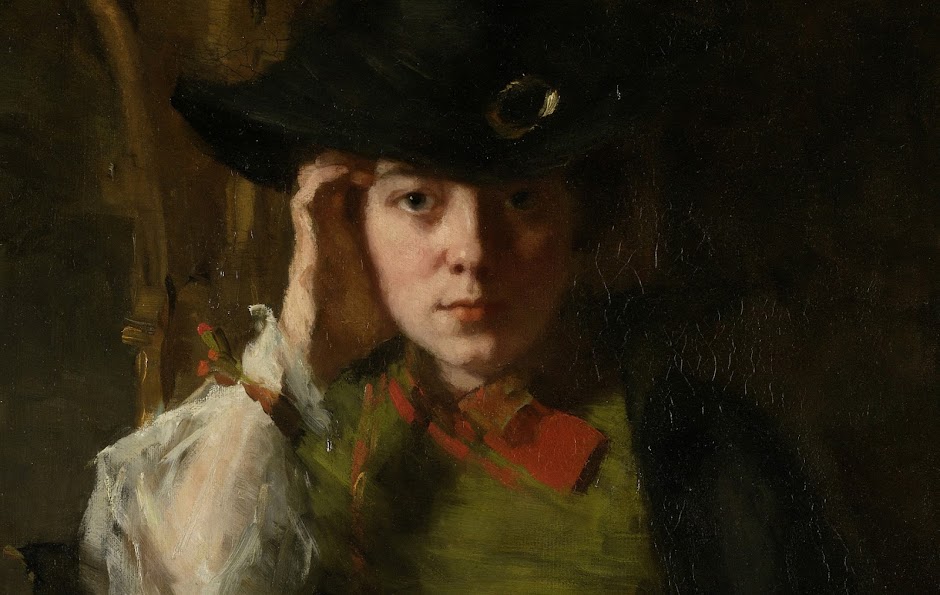 The portrait of Jeannette Bouman-de Lange by Jan Toorop (1900) hanging in the Rijksmuseum is pretty famous. Lesser known is the fact that Jeannette was the chair of the Association for the Improvement of Women’s Clothing. This organization propagated reform dresses, hygienic and comfortable garments allowing women greater freedom of movement. She also was involved in the organization of the Women's Work Exhibition in The Hague (1898), the first manifestation of the Dutch Women's movement. Jeannette's descendants recently donated her personal archive to the museum. The donation includes letters, photos, diaries and other documents about her life. These first-hand sources make it possible to deepen her biography. 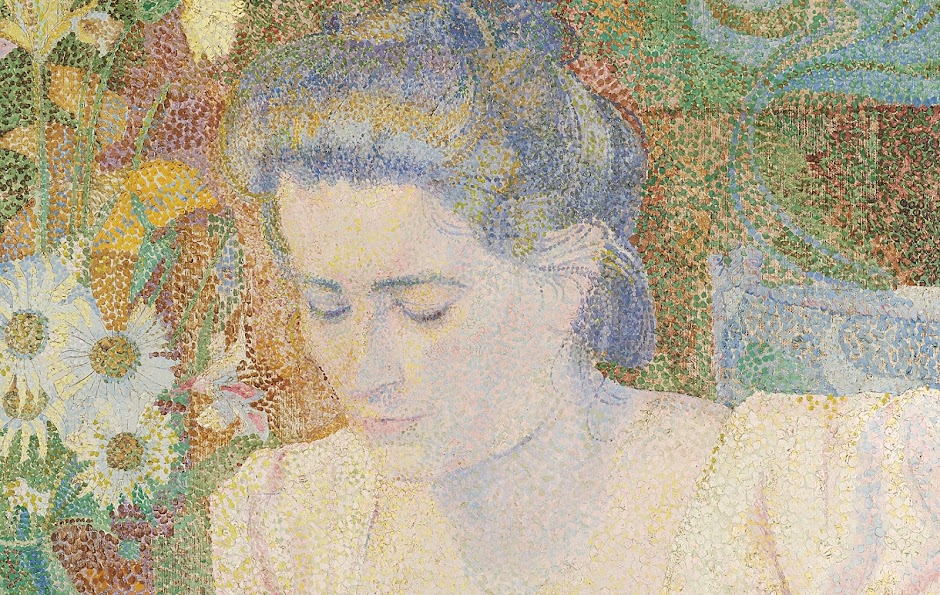 Miss M.P. Zettels was one of the first female employees of the Rijksmuseum. Besides working as the secretary of Frederik Schmidt-Degener (Rijksmuseum director from 1921 to 1941), she was responsible for the administration of the museum. During World War II, when foreign money transfers weren’t possible, Miss Zettels used her own money to make advance payments for subscriptions for Dutch periodicals. 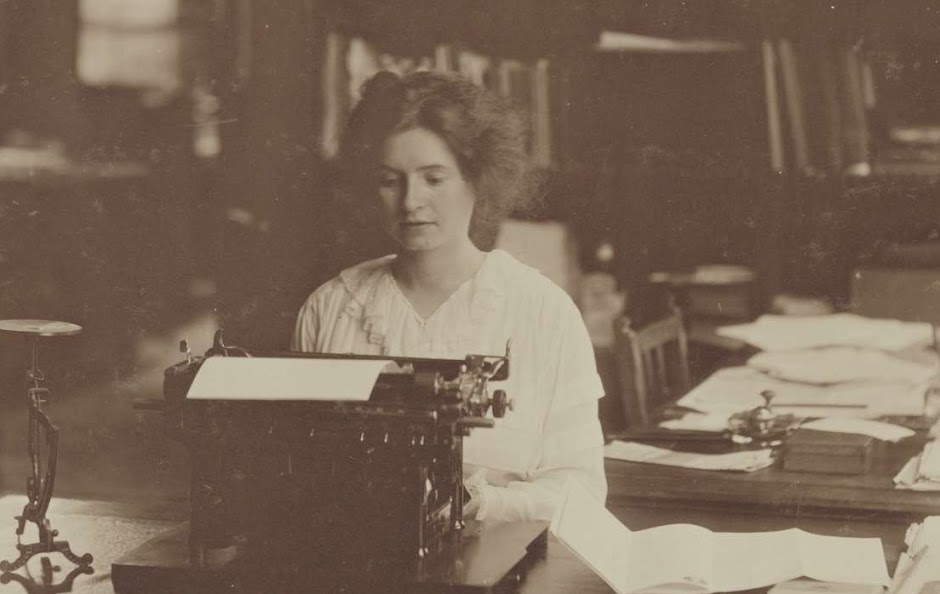 Ferdi wanted to create a playful and liberating ‘environment’. The sexual symbolism of her furniture sculptures literally becomes palpable when one touches the soft synthetic fur. The Wombtomb lent itself to ‘happenings’, ‘performances’ and interaction. The vulva-like opening forms the entrance to the sheltered interior. It is simultaneously a cosy tomb and a womb. 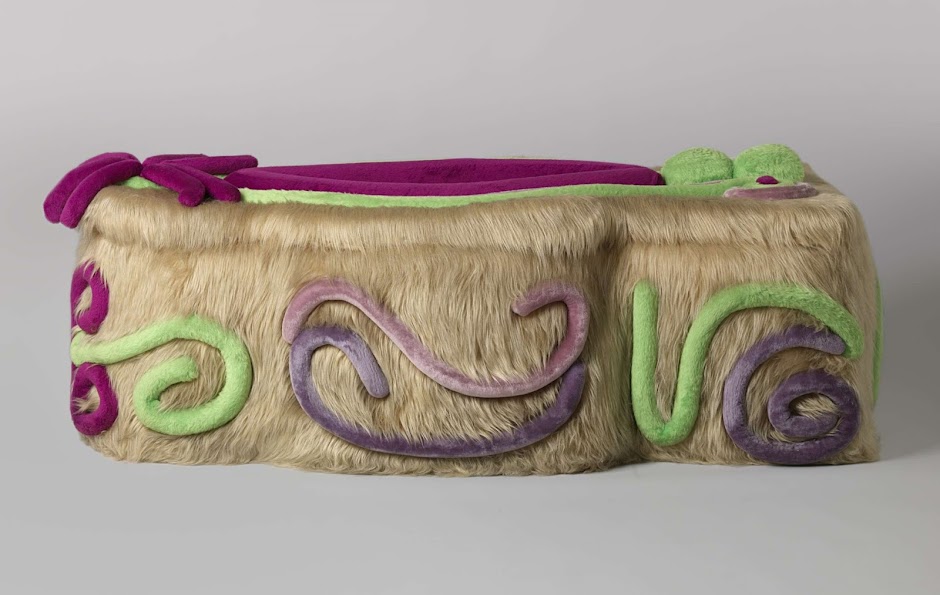