This gold cup was more expensive than The Night Watch, belonged to the Dutch Royal Family and was made by the most important European gold- and silversmith of the 17th century. Here are ten things you should know about Paul van Vianen’s gold cup.

1. For centuries the gold cup belonged to the Dutch Royal House of Orange 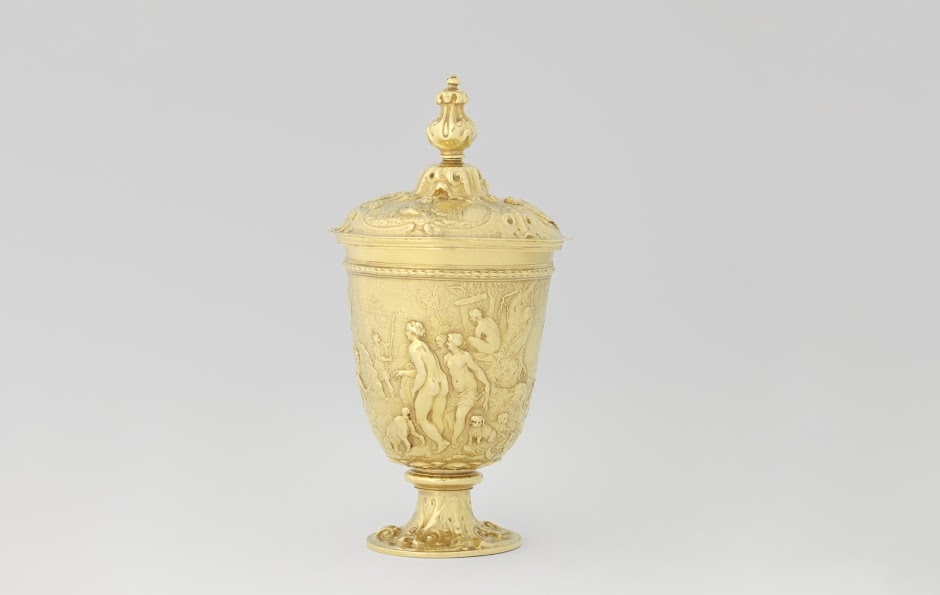 The rulers of the Netherlands cherished this masterpiece, and for centuries it was kept in the royal treasure house. In 1881, however, the German Von Wied family inherited the cup. A Dutch family recently bought the cup and immediately passed it to the Rijksmuseum as a long-term loan.

2. The cup was more expensive than The Night Watch 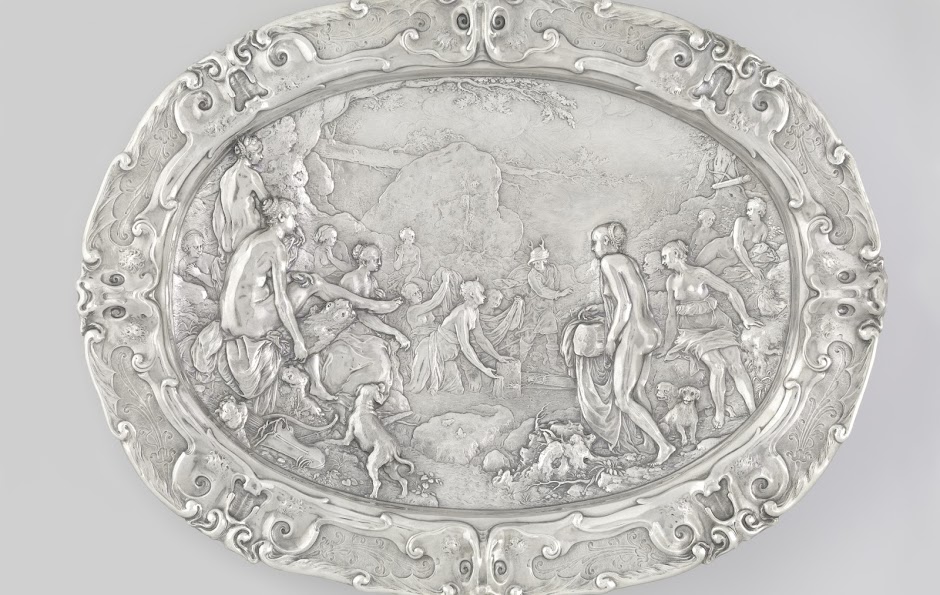 Basin with Diana and Actaeon, Paulus Willemsz. van Vianen, 1613 In the 17th century, gold and silver artworks were often more expensive than paintings, due to the value of the material from which they were made. But in the case Paul van Vianen, artistic value was much more important. For example, a silver ewer and basin by Van Vianen was valued at seven times the price of The Night Watch at the time it was made.

3. The cup was made by Paul van Vianen, the most important European gold- and silversmith of the 17th century 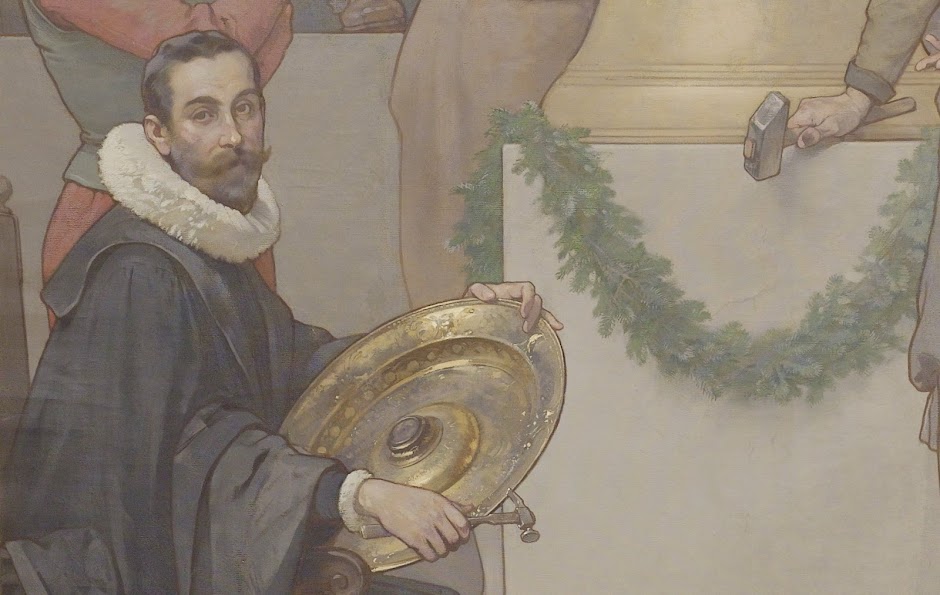 Paul van Vianen was born nearly 450 years ago into a family of silversmiths in the Dutch city of Utrecht. At the age of 16 he set out into the world, travelling to the royal courts of Europe to work and to learn. He reached the pinnacle of his profession in Europe when he was appointed as silversmith to the royal court of Rudolph II in Prague. He died there in 1613, at the age of 43.

4. The gold cup is the only one of Van Vianen’s works that he signed with his full name 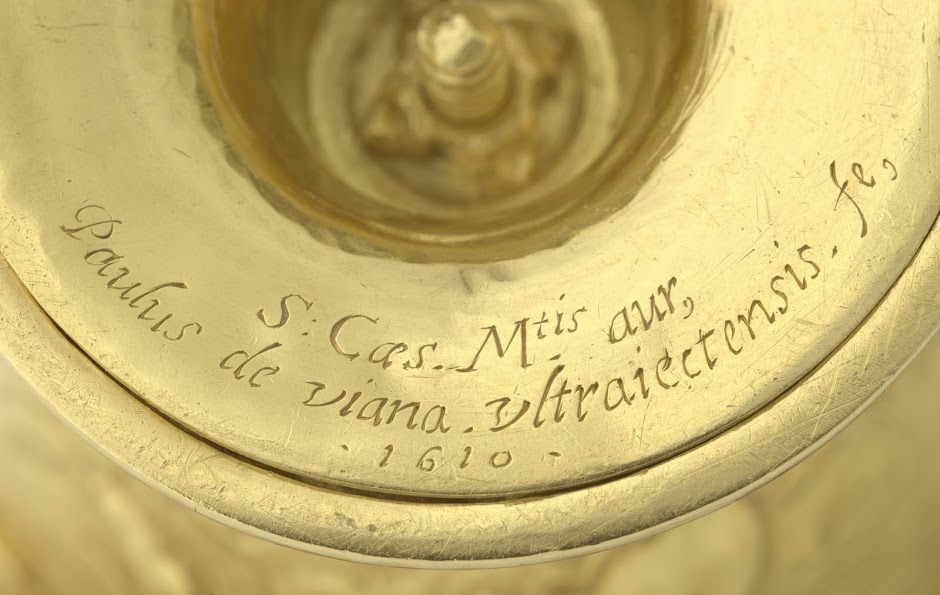 "His imperial majesty's goldsmith, Paulus van Vianen from Utrecht has made me, 1610"This cup is the only known work by Van Vianen that he made from gold and signed with his full name. Here you can see his signature and the date.

5. The cup is a warning against adultery 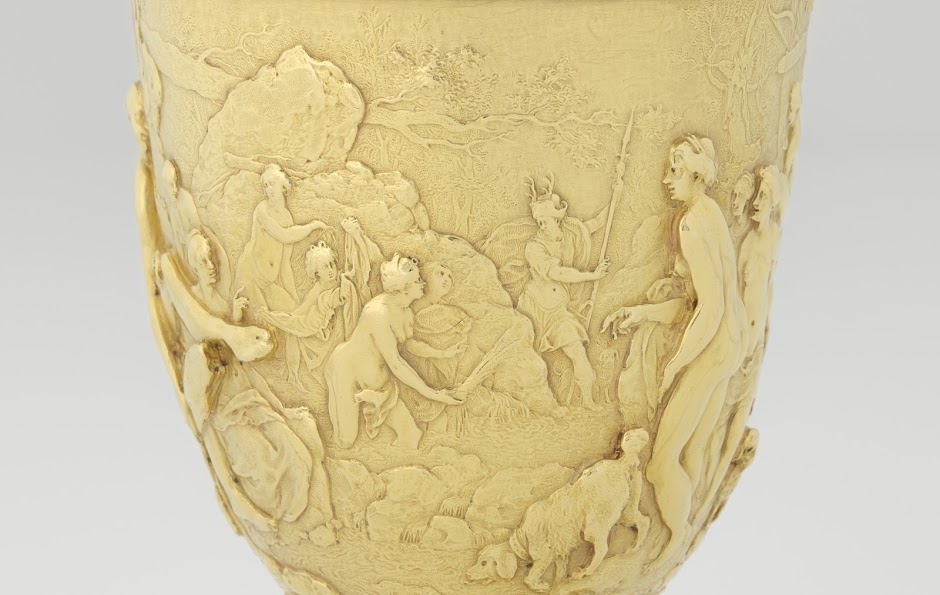 The scenes depicted on the cup are from the Ancient Greek myth in which Actaeon spies on Diana as she bathes. She transforms him into a stag, whereupon hunters and hounds chase him down and kill him. Paul van Vianen is warning the viewer of the consequences of adultery.

6. The cup is decorated with four different scenes 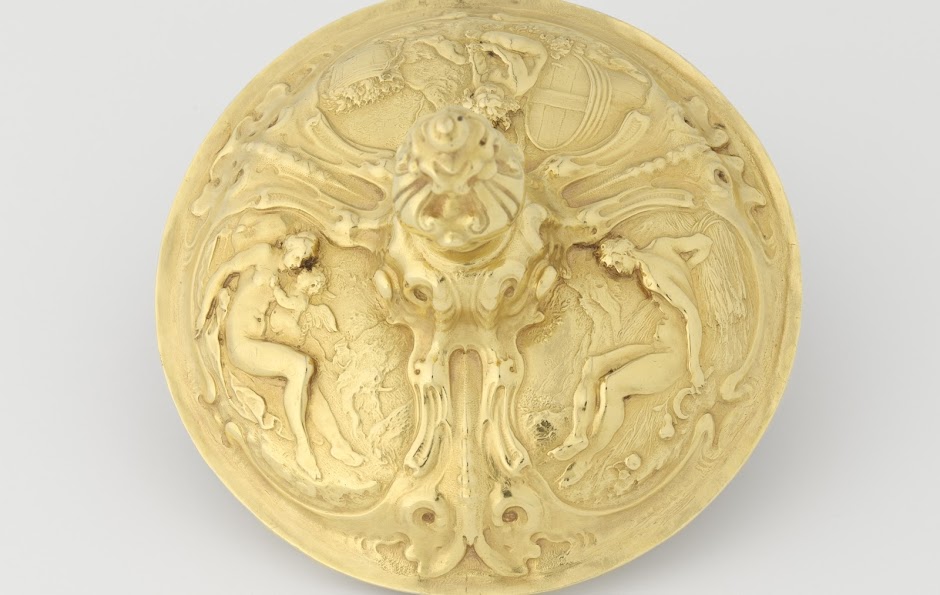 The two scenes on the body of the cup show Diana splashing water on Actaeon, transforming him into a stag; and a stag being hunted and killed in the forest. The depiction on the top of the lid is the key to the other scenes and shows three gods indicating that love must be fed. The underside of the lid features a portrait of the artist’s client.

7. The cup’s shape and decorative elements are also significant 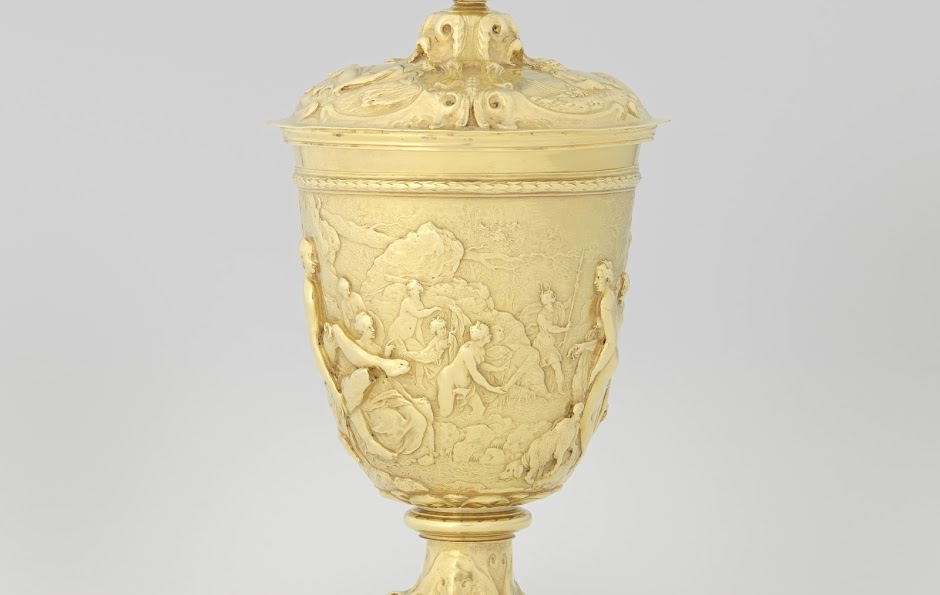 The fantastical masks on the lid and around the foot of the cup tell us that we are looking at the heavens, as if in a vision. The plain band separating the lid from the scene on the body of the cup indicates that the lower scenes are set here on earth, where in ancient times people and gods could interact as equals.

8. The portrait on the underside of the lid of the cup is of Heinrich Julius, Duke of Braunschweig and Lüneburg 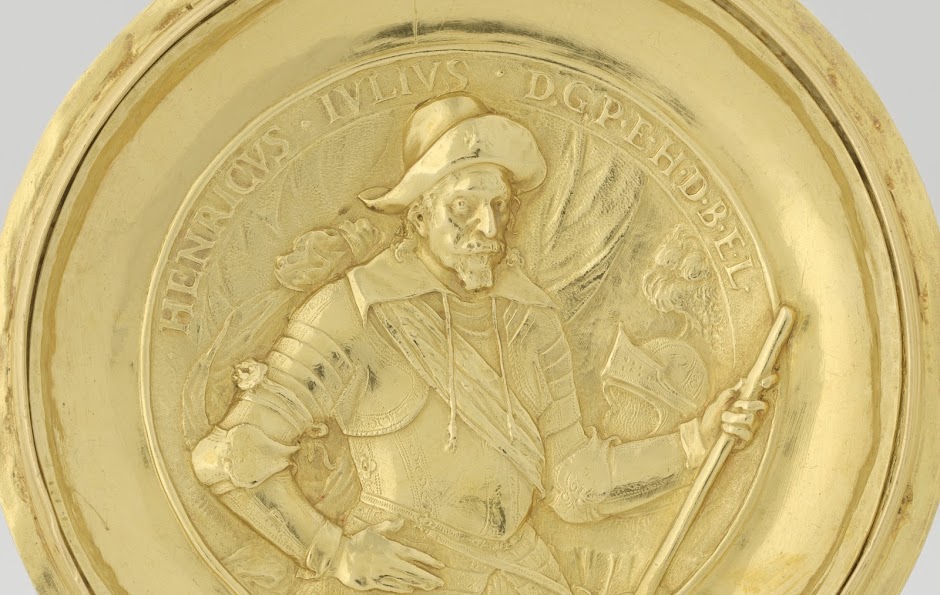 The man who commissioned Paul van Vianen to make the cup was Heinrich Julius, Duke of Brunswick and Lüneburg, Prince of Brunswick and Wolfenbüttel, and administrator of the Prince-Bishopric of Halberstadt. He was a confidant of Emperor Rudolph II, at whose court in Prague Van Vianan occupied the position of resident goldsmith. The marriage of Heinrich Julius’s daughter to Ernst Casimir led to the cup becoming the property of the Royal House of Orange.

9. The cup was made by chasing, not casting 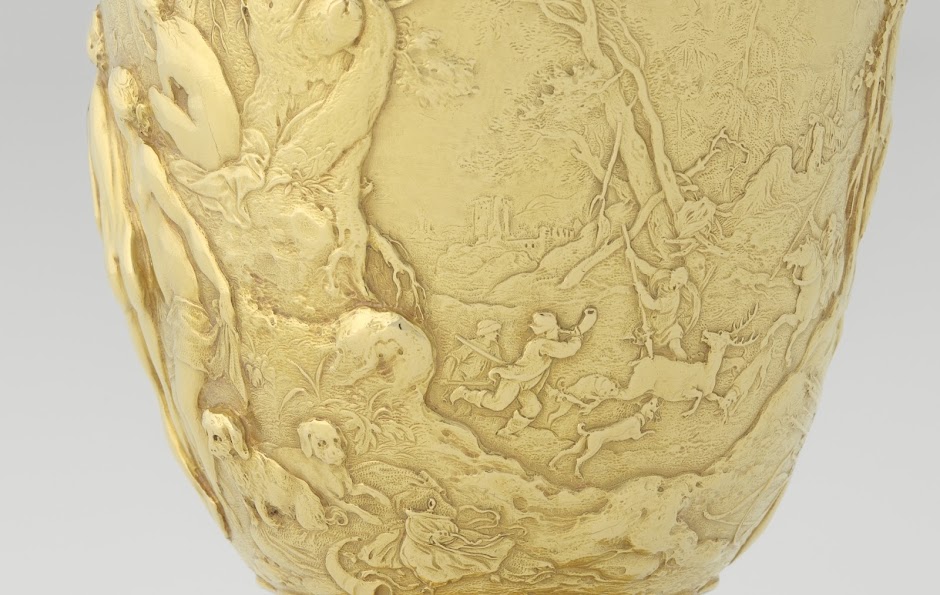 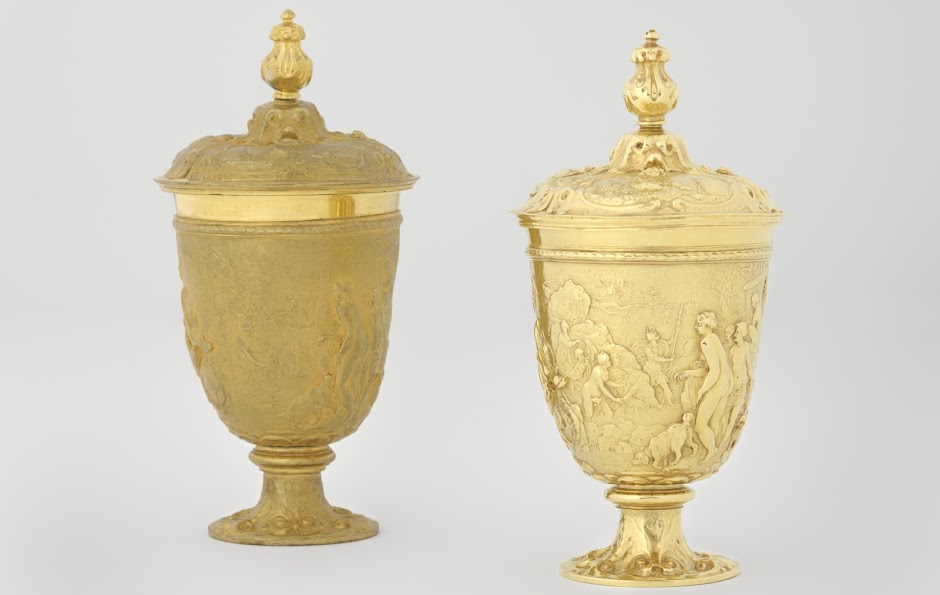 De replica (links) en het origineel (rechts)When the Rijksmuseum first opened, a list was drawn up of gold and silver artworks that the museum was keen to have in its collection. In the meantime, copies were commissioned, including one of the cup shown here. The long-term loan of the gold cup to the museum means that this wish has at last been fulfilled.